Salesforce admin? That’d be my dream job. But for the users, of course.

– Me, making the same damn joke, every single day until I’m dead

This post is part of a series. Read part one yet?

I found this week’s post particularly difficult to put together, because in the days since I put up part one, I’ve had the chance to really reflect on what was a difficult part of my career as an accidental admin.

I wanted to continue the narrative straight away, demonstrate to you how things continued from bad to worse as I clawed my way through office politics and lead duplicates and cup after cup of instant coffee as I stayed at the office late into the night trying to make sense of my own work.

But like all narratives, I built it from my own frame of reference. Yes, every conversation with Leslie was hard work. Yes, things got really bad with my colleagues after that – and yes, I’m going to tell you all about it next week.  To do that this week would rob me of the opportunity to step back from this first, most crucial encounter with a colleague, and explain to you what now, in the fullness of time, I understand my failings to have been.

It’s easy – too easy – to blame users when your deployment fails, but blaming users is like admonishing at a dog for sniffing another dog’s backside. They have weird and gross habits, and it doesn’t matter how many times and in what tone of voice you try and get them to stop, they won’t understand a word. Now, please don’t labour under the impression that I dislike my users as people; mostly they’re pretty decent folk. I even went to one of their weddings once, and I’m quietly optimistic of actually receiving an invite next time round.

I think as admins we’re all sometimes a little guilty of looking for unicorn users. Perhaps a better term would be Frankenusers; a series of attributes we deem ideal for a user, sort of lumped into a vaguely persony shape. Mine would look like this:

Let’s see how my users stack up against this criteria: 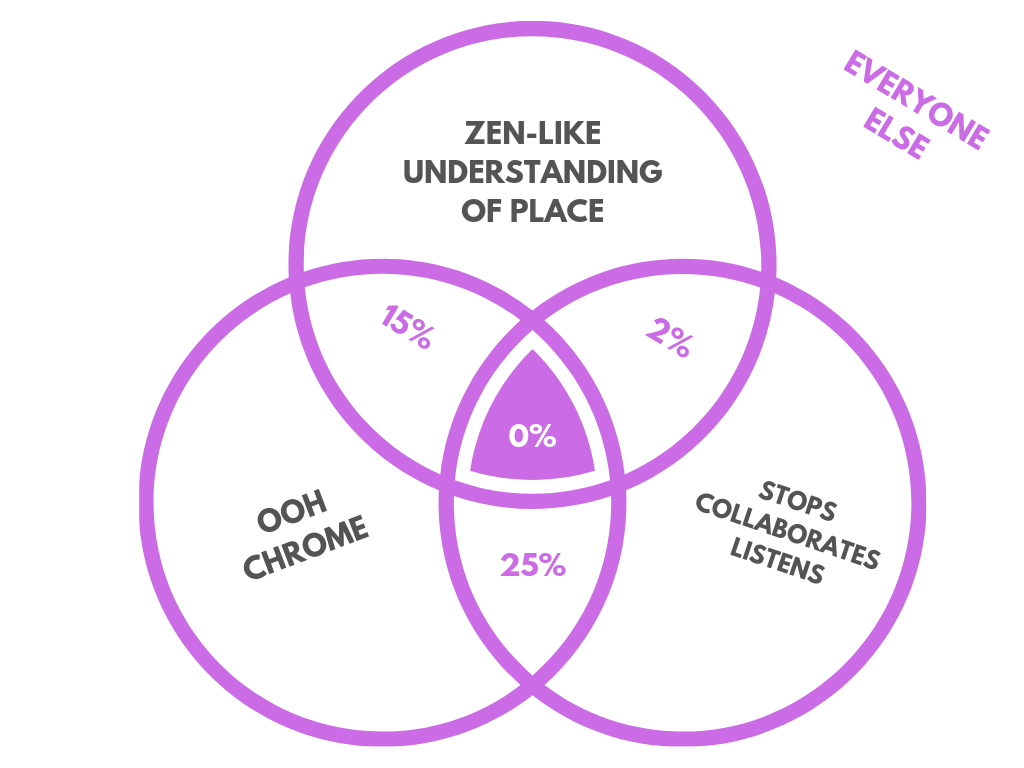 You might think, “oh, but in fairness, 42% of her users have at least some of these attributes, she could do a lot worse.” This is a phenomenon I call Icarusing; I’ve also heard it called “the bell curve of hope” – when a user is on the cusp of achieving greatness, only to crash so hard at the last.

Anyway, all of this has so far been a really long way of explaining the most common phenomenon I’ve come across since becoming an admin: you have to mind the gap.

What gap? The gap between your ideal user and the actual, real person that’s come before you with an issue.

It is absolutely not their fault that they’re so far out of your venn diagram they’d have to ask a stranger for directions. The overwhelming likelihood is that if they are not asking for a password reset, they are going to fail you in one very meaningful way.  They’re not going to be able to communicate their issue to you precisely enough, because what they perceive and experience is coloured not by their understanding of processes, or objects or flows or triggers, but by their own human experience.

Leslie didn’t come to see me because of a rushed migration, or duplicates, or so I could again explain the difference between activities and notes. It wasn’t that her monitor was too small for her lead list ever since lightning came into play either. She came to me because she’s feeling the pressure of her job – closing these specific 3147 leads – and she felt lost, helpless and frustrated.

This is all a bit backwards. Your users are supposed to feel lost, helpless and frustrated before you save the day with salesforce, not after. Take it from me – if you fix those feelings after, you’re not saving the day anymore – you’re covering your behind.

Let me contrast Leslie’s salesforce journey with that of Samantha’s, another user I discussed in my first post. Sam was introduced to salesforce as a way of solving a problem she was experiencing. It worked, and as a result she’s blossomed into a believer in the part Salesforce has to play for both her and the company.  Leslie, on the other hand, was introduced to salesforce not as a way of making her work life simpler, but rather as a means by which to make her work more useful to the company.

Ultimately, this meant that I didn’t lose the battle for Leslie’s buy-in when she realized how many leads she had to get through, or how few were turning into sales for her. I lost it because I didn’t start off by customizing the leads object around her pre-deployment.  Because of this buy-in factor, whilst talking to Samantha about her needs is like talking on an ultra-crisp cell line, engaging with Leslie is like talking underwater; she’s gesticulating wildly, but I don’t necessarily know what she’s getting at.

I was still too green to know how to deal with a Leslie-Type User back then, but I know now that I would have been better at my job – and happier around my colleagues –  sooner if I’d perfected active, empathetic listening sooner.

The wit in me tries to pass this technique off as a deep-seated mistrust in anything my users tell me, but it’s not. It’s an acceptance of their limits in understanding how the screens they see in front of them are pinned together, and a realization that I don’t use our system in the way they have to on a day-to-day basis. To this end, a user and admin are just experts in their respective fields coming together.

So this is how I try and work with my users now, and although I’ve never asked them, I hope they can feel a change in how I treat them. I hope they feel more respected and valued as a result. I certainly do. When a user comes to me with an issue, the first thing I now try and do in almost all cases is schedule a time – relatively soon – to spend half an hour shadowing the user. It’s really great; it normally comes with a cup of coffee, and by placing myself in a position to observe both the issue and the impact, I’m able to contextualize in a way that I wouldn’t be able to from a user’s imprecise explanation alone.

If the issue is a matter of user behaviour, then spending time with my user to show how to overcome it and why it’s important is vital in retaining my sanity as an admin – but I always back it up with an email. Trust me on that one. If there’s one tip I can give you, though, it’s that an admin should never just fix an issue.

My English teacher always used to say “tell them what’s coming, tell them about it whilst it’s here, then tell them what’s just left.”  She was talking about essays, but when it comes to being an admin, use that as your PR strategy. Find a way to communicate with your users that you’re listening and acting, working with them to improve your deployment – proactively or reactively.

Help, and enjoy helping. Demonstrate how you help your users.  Because if you don’t, there’s another gap you have to mind. It’s the gap you have to leave behind you to make sure Brutus can’t twist a blade in too easily. But we’ll deal with Samantha next week.