I mentioned a few months ago that Salesforce was investing heavily in the community around its Indianapolis tower and the new Pathfinder program looks like it will be the flag-bearer for those contributions.

Pathfinders will receive 4 months of training from Salesforce, supplemented with soft skills training from Deloitte, with the latter committing to hiring 10% of all Pathfinder graduates.

Find out more about the Pathfinder program here: https://www.salesforce.com/company/careers/pathfinders/ 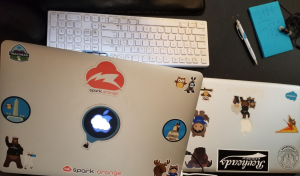 I had some work in White Plains this week, so was flying home through LaGuardia one afternoon.

My meetings ended early so I made it to the airport a little early and as I’m working my way through some emails, someone sees my laptop and comes over.

25 Minutes later, we’ve seemingly cured a few weeks of reporting angst.  Jump on my connecting flight to Boston (protip, JetBlue LaGuardia to Boston has free beer, wine, and wifi) and arrive to kickoff my 3 hour layover there.

I’m digging into my Thanksgiving Day sandwich with sweet potato tots (seriously amazing) and I get the, ‘Oh hey, you work with Salesforce?’  Pharma sales rep wanted a hand with a few list views and like all good pharma reps, he had company swag on him, so my efforts landed a new copper Moscow mule mug.

I was wondering if ‘Ohana Layovers’ could be an actual thing, posed the question to the Ohana Slack channel, and someone perfectly replied, ‘We have to be careful not to become like CrossFitters.’ Solid point sir, by the way, how was Murph on Memorial Day?

Anyone who has been following along with our Accidental Admins project and twitter feed knows we have not been as active for the month of May.  I’ve been on the road more than not (I went 5 weeks without more than 4 days in one state), and the rest of the squad has been similarly busy with job changes, cross-country movies, new projects, etc.

I also have a mild obsession with baseball, so my son and I hang out at the ballpark quite a bit, enjoying moments like this gem from his 85th game (he just turned 3) on Wednesday night.  That’s us in the front row ducking J-Hay’s bases clearing double against the Dodgers.

For the last few months, I feel like finding new topics to explore or even answering questions in the community to be a chore.  Over the last week or so, after not writing anything for almost a month, the motivation is finally returning.

I’m climbing back up the ranks in the Answer Community, putting pen to paper (fingers to keys?) for this site, getting ready for two user group presentations in the next two weeks…feeling recharged and ready to get back to work!